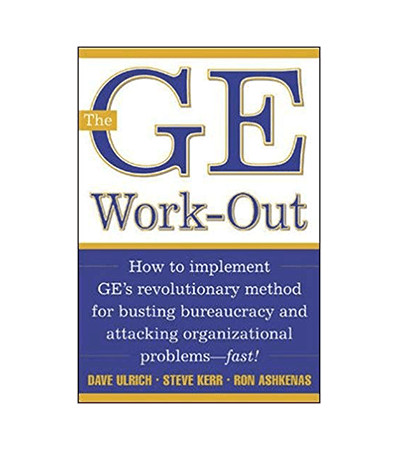 The process at GE, Work-Out, was originally conceived in the late 1980s.

Jack Welch, the president and CEO of GE from 1981-2001, was a champion of the concept. He was searching for structures that would remove the bureaucracy of GE, increase efficiency, improve decision making, and expedite speed of change. Welch encouraged cross-functional teams to work on low-hanging fruit.

Those teams prepared proposals for leaders to consider. Welch required the leaders to either approve the proposal, or deny it. There was no “Maybe,” or “We’ll think about it.” He felt any answer other than affirmative or negative wasted time and wreaked of politics, or bureaucracy.

Any organization can benefit from the learning in GE Work-Out, but organizational leaders or people who are charge of operations will find it especially useful!

Execution: The Discipline of Getting Things Done

Talk Like TED: The 9 Public Speaking Secrets of the World’s Top Minds

Have Any Book Recommendations?